Sidley is a remote volcano set on the flat white expanse of the Polar Ice Sheet. The mostly snow-covered peak has a 3 mile (5km) wide caldera, created by an explosive eruption 4.7 million years ago. Blue ice slopes guard the upper mountain and surreal snow ‘mushrooms’ sprout along the upper ridge, creating an elaborate maze that leads to the summit. Mount Sidley was first climbed in 1990 and then again in 2010.

From Punta Arenas to the icy continent

On Dec. 14 I arrived in Punta Arenas, a small town at the southernmost tip of Chile. All the climbers had been told to meet with our agency, Adventure Network International, for the next two days for expedition briefings, equipment check and generally mingle. Punta Arenas isn’t a bustling metropolis and can be walked across in about half an hour, and interestingly ranges from grand buildings to outright shanty houses in parts. A lot of the time was spent eating, waiting.. and did I mention eating?

A few days later, we piled onto a hulking Ilyushin-76 at Punta Arenas airport for the 4.5-hour flight to Antarctica. Our route crossed the notorious Drake Passage, then followed the west side of the Antarctic Peninsula and the Ellsworth mountains range.

Life in the clams at Union Glacier Camp

After landing on a blue ice runway, we took a specially adapted polar van to Union Glacier Camp, which is 5 miles from the runway and became our home for the next three weeks. Life at UG was great – New Year’s party in an ice cave, champagne outside at midnight to celebrate 2014, and did I mention the five-star chef?! One memorable meal included poached salmon with roasted sliced almonds, coucous with fresh coriander, potato gratin followed by cointreau-flavoured chocolate biscuit pudding.

We all stayed in spacious ‘clam’ tents and learned to live with 24-hour daylight. For the most part I loved it, though it was hard to sleep at times even with 2 eye masks and my woolly hat pulled down. The best thing was to crawl into the down sleeping bag, but then it became slightly hard to breathe..

Marking time ahead of the expedition

Uncertain weather at Mt Sidley as well as at the fuel cache area meant we had time on our hands. We spent a few days climbing small peaks such as Mt Rossman and Rhodes Bluff near Union Glacier Camp to acclimatize to Antarctic conditions and get to know our (mainly Russian-speaking, as it turned out) team before setting off for the extremely remote Mt Sidley.

Left: me at the foot of Elephant’s head, near Rhodes Bluff. The cave just above my head is the elephant’s ‘eye’

Then on Dec. 24, everything was suddenly a go. There was a pocket in the low cloud and we would now be able to land at the fuel cache half way to Sidley, and at the mountain itself. Our remote pilots were happy with the forecast and early on a very windy Christmas Day morning, we piled into a Twin Otter.

The plan was to fly to the middle of nowhere, followed by a second plane carrying 8 drums of fuel. We would both land, the other plane unload the drums, and we would refuel using four of the drums, after which the other plane returns to UG Camp. The remaining drums would be used by us on the way back after the expedition.

Camping in the crater of Mt Sidley

The landing at Mt Sidley was spectacular. Our Twin Otter on skis circled slowly, dipping low into the crater and out to circle round again, with the pilots scrutinising the terrain to see if it was safe to land. The whole setting was a bit nuts – a small plane parked inside a volcano; endless snow and sky sweeping to the horizon. A beautiful and hostile place.

We unpacked and anchored the plane, set up camp, then spent the next two days waiting out winds of 30+ knots and driving snow. It was fun – our kitchen tent was our clubhouse, where we whiled away the hours filtering ‘real’ coffee through kitchen roll, eating and swapping stories. A particularly entertaining evening was had when Dylan, our guide, re-enacted the entirety of the movie “Gravity”. Meanwhile my Russian improved greatly thanks to my three team mates.

But we enjoyed all of it (even the times when I woke up to the side of the windblown tent bashing me repeatedly in the head). I don’t think it got any colder than -25C during our stay.

On Dec. 27, we were finally good to go. It was a glorious clear day, and the wind was gone. We clipped onto the rope and hauled our sleds and carried packs up from base camp (2,000m) to high camp at around 3,400m. It was strenuous but enjoyable. A few hours of sleep and we set out for the summit (4,285m).

The slopes of the mountain are windblown, with hard packed snow and sections of blue ice. Gentle slopes near the base gave way to steeper terrain higher up. We followed the summit ridge along the rim of the caldera and wove our way between a maze of surreal ice ‘mushrooms’. These snow features are formed by wind and moisture depositing rime ice on small obstacles, over the years evolving into massive structures.

After searching around, we finally found the highest mushroom. We clambered up (by now the weather had turned windy and snowy) and took photos – to our amusement my tentmate Liana posed with four different random banners. The hike down went smoothly.

After two days at base camp to wait for weather windows, we packed up and headed back to UG Camp. Liana and I had only been back for about 5 minutes before we ran screaming to the shower block.

We spent the next week waiting, in between New Year’s parties and rambling Russian toasts, devouring books from UG’s brilliant library and watching videos (including “The Thing” – it has an Antarctic theme!). For three of us, our mission was accomplished, and we couldn’t wait to get home. Liana stayed on to climb Mt Vinson, Antarctica’s highest peak.

In the wee hours of Jan. 4, 2014, I finally boarded an Ilyushin and hightailed it out of the wilderness. It felt odd to see vegetation again! 48 hours and 5 flights later, I finally got back to the UK. Wonderful expedition, but equally wonderful to come home.

LATEST: My book, Climbing the Seven Volcanoes: A search for strength, comes out in April 2020! 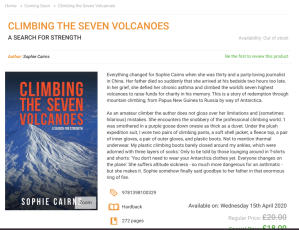 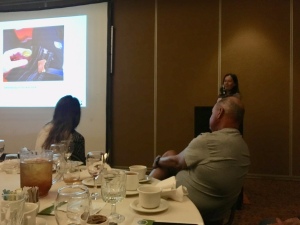 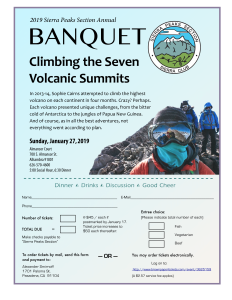